On September 31, 1982, the communist regime perpetrated a crime in Lubin that shall forever remain in the hearts and minds of the townsmen as well as all Poles. Due to the actions of Civic Militia 3 people were fatally shot and other tens were wounded. The memory of the victims of the Martial Law is crucial for coming generations. The memory of Michał Adamowicz, Andrzej Trajkowski and Mieczysław Poźniak, all of whom were killed by the 'people's government', should never wane. The names of those whose decisions contributed to the killing of innocent people should also never be forgotten.

I decided to use the website to publish photographs documenting the happenings of those days, collect publications concerning the said tragic events and document exhibitions related directly or indirectly to them. Should you be in possession of any materials or know links to the internet archives I have not managed to find, please feel free to share. I will be more than grateful for any help. 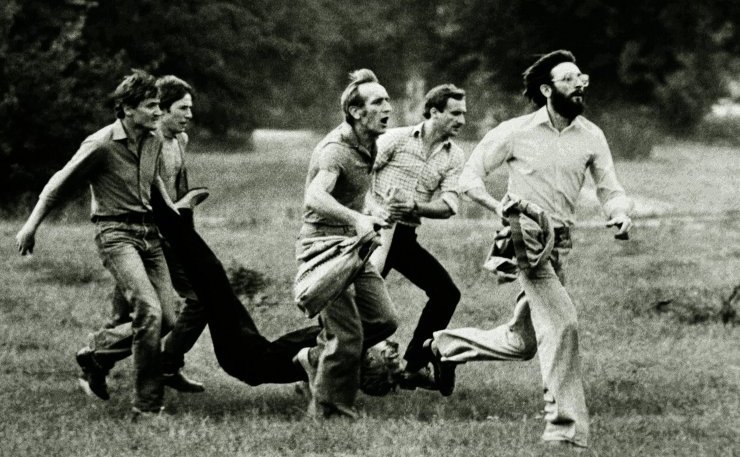 All of these pictures were taken by accident. Having worked for several years as a reporter, I had the camera on me from force of habit. Before I began to take pictures I felt this regular, humane fear. Fear of the crowd: that they would take me for a secret service agent. Fear of the militia: that they would take me and beat me up. Only when someone with whom I was bilking from a charge of ZOMO-men (ZOMO – Motorised Reserves of the Civic Militia) cried: "C’mon man, shoot this motherfucking hell!", did I set my eye against the view-finder.

Frankly, I do not exactly remember what followed. Hundreds of scenes and people fly by my eyes. But for these pictures, it would be even more difficult to put the fragments in chronological order. When I go over them, the jigsaw becomes evolvable.

I took the most important picture of my life - that of the group of men carrying fatally wounded Michał Adamowicz - running hand in hand with them. A moment earlier I took a picture of people leaning over a bleeding man; his head could be seen from behind them. I was in some sort of shock at that time, my memory hardly took a notice of the scene.

It was only the following day, when I processed the film and blew up the frames, that I saw the scene that made my heart beat really hard. It came to me what I had witnessed: a man had been killed before my eyes. And it was not a nameless soldier or a car accident victim. It was someone who, several minutes before, could have been running through the meadow like me, ducking behind the trees, hearing the zipping of the bullets and watching leaves showering down when cut by them.

The scene of the tragic events of September 31, 1982, is strewn with stones-witnesses that constitute a monumental sculpture installation by Zbigniew Frąckiewicz. On one of the stones the author engraved the following inscription: "Silent; yet, they cry".

Photography – I think – is like a stone. There is no sound, no scent, nor twinkling fairy lights. Instead, there are emotions, moods, light, and – most importantly – truth.

I want my pictures to keep crying, silent like the stones.